I have a confession to make. I secretly love a bit of vacuuming. That satisfying sound as the dirt is sucked up, those lovely swipe marks on the carpet, the feeling of order once you’re done… sad, I know. Perhaps it’s just trying to retain some element of control in a houseful of small boys.

But, as every parent knows, having something to hand to deal with the trail of crumbs/apple stalks/rogue peas/mud flakes that form the wake of all children (or maybe that’s just mine) is crucial, whether you love hoovering or not. Enter the cordless vacuum. It’s quick, it’s easy and it beats grubbing around on your hands and knees with a dustpan and brush after dinnertime Armageddon.

Cordless technology is pretty good these days – almost all the major players have a more number offering than the traditional plug-in models. But which to go for with such a plethora of choices? I tested five and here’s my verdict. 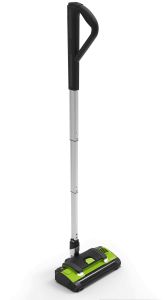 If space is an issue, then this could be the vaccum for you. Not only can you pop the head off (which you can then use separately on, for example, upholstery), fold it all up and stick it into a drawer, but the whole thing will also fit into a handy little drawstring bag – perfect for hanging on the back of a door. It’s also super-light (a mere 1.5kg) and has excellent battery life.

Performance-wise, it’s not going to replace a regular vacuum cleaner unless you have a really tiny home – it lacks heavy-duty oomph, and would be both a bit too small and a bit clunky to do a whole house, although it’s great for tackling instant spills and quickly freshening up, say, a hall carpet with minimal faff.

Slight downside in that, rather than being an empty-straight-into-the-bin type of cordless, it comes with the world’s tiniest vacuum bags, although the company claims said bags can hold three times their microscopic 0.3 litre size, and says this also does away with the need to fiddle around washing a filter. It’s also mildly like a shopping trolley, with a bit of a mind of its own. Once you’ve got used to that, though, this is perfect as an instant crumb catcher – quick, easy and effective.

If money’s no object, this is – dare I say it – one sexy beast that pretty much anyone would welcome into their home (told you I was into vacuuming). It could also happily replace a regular plug-in vacuum cleaner – in fact, Dyson have stopped making corded models, so confident are they in their cordless technology.

This was definitely the most powerful of the vacuums I tested, capable of sucking up pretty much anything my children threw at it (although peas, admittedly, remain testing). It comes with a choice of two heads and various other attachments to get into every sort of corner; I used it mainly with the regular head which has the added bonus of automatically switching to the most suitable mode if you move from vacuuming carpet to hard floor.

It’s a bit of a pain that you have to keep your finger on the button the whole time, and the battery life isn’t perhaps as good as others – but that’s what you get for this much power. If you’re looking to replace your regular vacuum cleaner with something you don’t have to bother plugging in, I’d definitely think about saving up for this.

Best on a budget 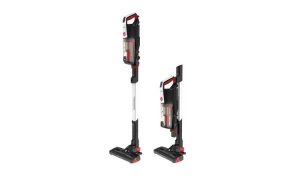 I’ll be honest here, this is probably my least favourite of the vacuums I tested. Although it has the benefit of being both light and manoeuverable (at 1.7kg it’s Hoover’s lightest cordless vacuum), the downside of that is that it feels flimsy, and the power isn’t great either. In my sprinkle-flour-on-the-carpet test I had to put it in boost mode to even deal with that, which it didn’t do a great job of – although admittedly, it was relatively low on battery at the time.

Still, you don’t want to have to keep something on perma-charge just to deal with the lightest of spills. Plus points? The removable battery pack makes it super-easy to charge as you don’t have to plug the whole thing in; the brush in the head is easy to remove and clean if it gets tangled up with fluff and hair, and the lights on the head means you can see into the dustiest corners. It’s also relatively affordable compared to other models. But it wouldn’t be my top choice.

If you’re in the market for an absolutely fine cordless that doesn’t cost the absolute earth, this is a good one to go for. I wasn’t blown away, but neither did it press all my irritation buttons.

Downsides are the rather odd weighting – it’s heavy at the top but light at the bottom which takes a bit of getting used to – and the capacity, which isn’t brilliant, but on the plus side, the small head means it’s very good at getting round little edges and into corners, and the power’s pretty good. “Satisfying to hear the dirt actually going in” was my sister’s verdict. 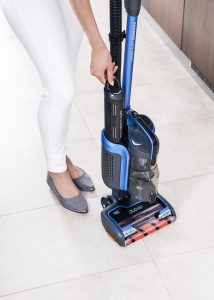 When I first put this together I initially thought I’d broken it – not a great start. Getting the right parts in the right place eventually involved a spoon, so all I can say is, read the instructions.

My second word of warning is thus: if you’re looking for something light and easy to whip in and out of the cleaning cupboard, this may not be the vacuum for you.

It weighs in at a fairly hefty 5.7kg, and when it’s complete with the detachable pod (the Lift-Away bit), it’s fairly broad too, so takes up a fair bit of space.

All of that aside, however, this is a surprisingly manouverable and pretty good vacuum – it moves smoothly, has two different floor settings and benefits from a boost button for serious spills. The best thing? The crazy lights on the front, which made me feel as if I was hunting aliens while cleaning, and the fact you can detach the Lift-Away bit and carry it around like a Ghostbuster.

Written By
Lucy Denyer
More from Lucy Denyer
Ready to start weaning and not sure what highchair to contain your...
Read More

0 replies on “5 Of The Best Cordless Vacuum Cleaners”