Emily Jenkinson's toddler was a reluctant potty user but with some potty training tips from granny she soon got the hang of it...

Last summer, my two-year-old daughter reached the ‘moment’ for potty training. All the signs I had read about were there – hiding to poo, having a dry nappy for longer periods of time and generally being more aware of when she was about to go.

It was also summer so she could run around with no clothes on, and she pretty much always pooed at tea-time. Tick, tick, tick.

I won’t lie. I was a bit anxious about it. Operating on very little sleep with a demanding newborn (her little brother had recently been born), I worried that I wouldn’t be able to dedicate the undivided attention she would probably need to make it a success.

She was also due to start nursery in a few weeks. But having read Aurora’s brilliant blog ‘How I potty-trained my son in 2 days’, I decided not to stress myself out with Gina Ford manuals or house confinement and just go with the flow. 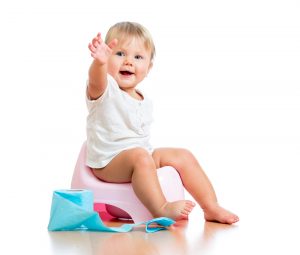 The flow of shit, as it turned out.

Apparently, it is quite common for children to become freaked out by poos when they are being potty trained.

While wees dribble out merrily into the potty and everyone claps and shouts “well done,” the sensation of doing poos without the safety net of a nappy can feel very strange and scary.

My daughter was most unnerved by them. In fact, every time she needed one, she would leap and shout that she wanted her nappy back on, or run around the kitchen table, squealing in terror as bit of poo dropped out onto the floor behind her. 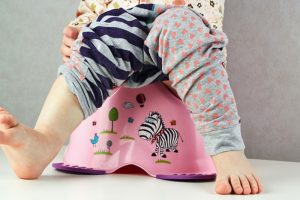 As the baby screamed, our dog would trot behind her calmly eating it and I entered a unique kind of hell.

Sensing via my husband that I was at my wits end, my amazing mother-in-law stepped in to the fold, taking residence in our loft for a few days and bringing some old-school wisdom that broke the back of it all really very quickly.

Here are some tips that the books WON’T tell you:

Forget the potty training charts and buy some Maltesers

When I realised things were not going to go smoothly, I went into google overdrive and ended up buying stickers – supposedly as an incentive to do it in the potty. Alas, and not altogether unsurprisingly, the allure of a tiny gold star was no match for the packet of Maltesers that my mother-in-law brought with her, and which led directly to my daughter’s first successful potty poo.

Note: Once she had got the hang of it, I downgraded from Maltesers to mini marshmallows and they phased out naturally over time.

There are lots of potty-training books out there that can help with potty-training but for the very specific ‘Poo Fear’ that my daughter experienced, this was a complete game-changer.

All about a little mole who tries to find out who ‘did their business’ on his head, it arms you with a battery of humourous diversions based around the fact that everyone does them, they’re all different sizes, they come fast or come slow, and (apologies to the sensitive) might go plop-plop, splatter-splatter or maybe even thud-thud. How can you be scared of poo when it is quite so hilarious?

Lots of people had recommended portable potties to me prior to potty training, so I duly bought one, but I wouldn’t recommend it to others.

Basically, it was a pain to lug around, I could never open it quick enough when she said she needed to go NOW and it cost money that could have been spent on flat whites.

When you’re out and about and emergency strikes, all you need is a nearby tree or car, some poo bags and a change of clothes (for splatters or accidents). This phase doesn’t last long.

If you can’t give undivided attention to your potty trainee, call in some help

Two years is a common gap between babies these days which means that lots of stressed, sleep-deprived mummies are trying to potty-train older siblings while grappling with a newborn at the same time.

My mother-in-law brought lots of wisdom, but she also enabled my daughter to be given the undivided time and attention she needed to potty-train – just by being a loving extra pair of hands.

Don’t confine yourself to the house

Apparently Gina recommends this, but frankly, no-one wants to be stuck in the house all day, least of all a high-energy toddler.

We packed the aforementioned poo bags and a change of clothes and went out as usual. I did also put the nappy back on for long car, train or plane journeys (when one REALLY doesn’t want a poo crisis) during the transitional period – but this didn’t seem to do any harm.