There is no such thing as a holiday when you have very small children. Until your youngest child is, I’d say, 3.5, a holiday is not anything you recognise as such. It’s more like being a spy: having completed your training in your own country, you are then sent on a terrifying mission to a hot place, where you must complete your tasks in a totally unfamiliar environment.

A ‘holiday’ when your children are very small is just very intense childcare in a different place where your child will be yanked away from everything it knows, made to sleep in a room where the light comes blasting in at 5am, probably bitten by mosquitoes, and will be hot and discombobulated. And if it gets ill or is teething, well, then … fuck.

Nothing makes me row with my husband more than the issue of holidays.

Then just as the child gets used to the funny-tasting milk, the weird bed, the sun, the heat, the food and the time difference, it’s time to make him sit on a cramped aeroplane for three hours at a time when he ought to be asleep, horizontally in a cool dark room, while his eardrums squeal and burn from the air pressure and his eyes dry up to raisins.Nothing makes me row with my husband more than the issue of holidays.

Flying with small children drives me fucking demented; entertaining any child too young to amuse themselves with an iPad on an aeroplane for three hours is like a living hell to me. Generally I am an excellent traveller myself, incredibly patient. I just zone out for hours looking at nothing, thinking about anything. I just sit out the journey, bovine. In fact, car journeys make me zone out, flying makes me zone out.

I find it practically hypnotic.I used to have a boyfriend who drove me crackers because whenever we did any kind of long car journey he insisted that I read out bits of the newspaper to him. He made out like driving was such a big, awful deal (at that point I couldn’t drive), that he needed constant entertainment, which acted as both a reward and a stimulus.

Now I can drive and I have done some long fucking car journeys, and driving long distances is – hello? – a piece of piss. If things get really boring I might turn the radio on. But I don’t need to. I can just pass the time quietly and think. Whenever my husband wants to have a little bellyache about a long drive, while I make sure the kids are alright, pass them crackers, soothe tantrums, change nappies on my knee, I remind him that I would be more than happy to drive. Then he usually shuts up.

My point is, I am very good at long journeys where I can just sit and be. What I cannot do, what I find staggeringly stressful, is having to be constantly engaged with other people while I am travelling, whether it’s reading bloody bits out of the paper, or playing with a thirteen-month-old or having to talk to a very chatty person in Seat B. 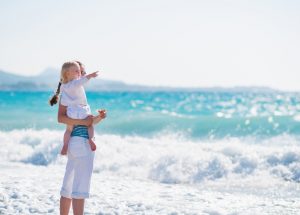 So I resist air travel with my children wherever possible, only relenting when I feel like my husband is going quite bonkers and stir-crazy without a week plonking about in the sunshine next to a pool.

My husband believes my resistance to long-haul travel with children is absurd, that I make too much of a fuss about it, pack too much, worry too much. He believes I am an unrelaxed and nervous traveller.

– he does not understand the potential for disaster re: flimsy holiday rental window treatments, broken air con or a bunch of end-of-term students setting up a ‘party’ house half a mile away

– he will not have to deal with the children if they are ill on holiday
… and so on.

Kitty is now three and a half and easy to schlep abroad on any flight under about five hours. She is even happy, now, on late night flights. I just let her have a big afternoon nap (she’s usually not allowed one at all) and then she merrily stays up, relishing it, nodding off on the final taxi ride, and is easily transferred to whatever bed waits at the other end.

On a recent trip to Portugal my husband and Kitty hung out by the pool while I spent most of my time wheeling Sam round the grounds of the hotel.

But it is only just okay with her, even now, and having Sam in tow as well means that the positive experience of the holiday with Kitty is sort of negated by Sam, who needs constant entertainment and doesn’t want to swim or sit in the sun.

On a recent trip to Portugal my husband and Kitty hung out by the pool while I spent most of my time wheeling Sam round the grounds of the hotel. Unable to walk or crawl, not interested in getting a tan or swimming, the only thing Sam enjoyed was being strolled around the hotel’s gardens while he clung on to his bottle.

In a perverse way I found myself sort of not caring. I regarded the experience as a kind of fond farewell to this awful sort of ‘holiday’ because the next summer, I reasoned, Sam would be two years old and, although still no picnic, he will be able to stagger around and kick a ball, or splash about in shallow water.

We took Kitty to Cyprus when she was fourteen months old and my main memory of that holiday was her eating a lot of sand, the bizarrely insufficient curtains in her room, so the light woke her up at 6am (latest), her unprecedented 3am night terrors and the perverse joy of being able to stretch our baby monitor from her room down to the bar so that we could have dinner without having to fuss about with a babysitter.

Try and holiday exclusively in England? Good luck. We’ve tried that and if you get unbelievably lucky and have terrific weather it’s just about okay, but if it’s raining it’s like home but worse.

But what are you going to do? Not go on holiday? Try and holiday exclusively in England? Good luck. We’ve tried that and if you get unbelievably lucky and have terrific weather it’s just about okay, but if it’s raining it’s like home but worse.

Clever, smart, rich people bite the bullet and fork out a lot of money for a flash villa in a close-ish part of Europe and then rent the same one every year. Once there, they hire cooks and nannies by the dozen. Then they will usually express astonishment to the rest of us that we find holidaying with small children problematic. ‘The Italians are so wonderful,’ they will say. ‘They adore children – they’ll play with your bambini for hours.’ Yes, for fourteen euros an hour I’m sure they will.

A while ago I stopped expecting any kind of enjoyment out of holidays with my children and started seeing them as just a thing to do because otherwise we will all get rickets from a lack of sunshine.

A while ago I stopped expecting any kind of enjoyment out of holidays with my children and started seeing them as just a thing to do because otherwise we will all get rickets from a lack of sunshine. And also I sometimes feel like the whole exercise of having children these days (as it’s such a choice now, rather than just a biological imperative) is to make us appreciate small things that we might have taken for granted – like holidays.

Before I had children I was constantly on holiday – people would say to me, ‘God, you’re going away again?’ When Giles and I were not abroad, we would loll around in hotels in the English countryside, visiting spas and getting slobbering drunk in their uptight restaurants.

When I think about those holidays now I think: ‘A holiday from what?’ I didn’t really do anything when I wasn’t on holiday. I would poke about in some job a bit and then after I walked out of my job at the Independent I really didn’t do anything.

Holidays after that were mostly about escaping some scandal or other that my husband had managed to get himself involved in.

And what did we do? We just staggered from one meal to another and read books. I wondered, often, what I was supposed to be doing. I always felt fat.

Then there are no holidays, there is no escape. You are simply having a change of scene, but the new scene can often be worse than the one you’ve left. ‘Well, it makes you relieved to come home at least,’ my mother always offers as a panacea.

In fact what I have realised in the last three and a half years is that what will constitute a holiday, to me, until Sam is old enough to splash around in a swimming pool wearing water wings, will be when my husband goes away, in term-time, and neither of my children are ill.

I loll about doing nothing, not making the bed, watching awful telly and eating takeaway for my dinner. It’s heaven.

This extract is taken from Esther Walker’s new book Bad Mother. If you can’t wait for the next instalment, buy and download the whole book here.

By
Esther Walker
More from Esther Walker
You might think, as my husband Giles [Coren, the restaurant critic] goes...
Read More