Two children under the age of two is essentially two babies (and double the amount of nappies to change).

You can’t expect your toddler to grow up over night just because they’ve got a baby sibling; in fact there’s a high chance they will become needier, clingier and more prone to tantrums.

This is not to say that those months between Alfred being born (April) and Hector turning two (October) weren’t wonderful. Hector gradually began to tolerate his new brother and Alfred was fine about being prodded and poked having never known life any other way. 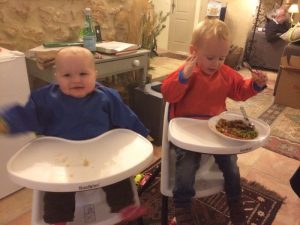 The house was chaos and just getting up in the morning took ages but gradually I found ways to speed things up (cut corners) and avoid disasters and life got so much easier.

Here are my tips for surviving the early weeks with two under two:

Invest in a good sling or baby carrier

The minute Alfred was big enough to be carried in a sling, my hands were free to retrieve toys/ push the buggy/ unwrap chocolate bars and Hector began to forgive me for having another child.

I was very happy with the Babybjorn Original carrier and recently upgraded to the BabyBjorn ONE ( I reviewed it here). You can also read our reviews of the Ergo Baby four position 360 and the ByKay Essential Wrap

Make a safe haven for the baby

Toddlers, however wonderful they are, just can’t be trusted around a newborn. After Hector left tyre marks on Alfred’s face from a toy tractor (just before the health visitor arrived), Hector’s old playpen became Alfred’s safe haven in the kitchen.

I raised up the base of the pen to the higher level and Alfred lay there on his Cocoonababy, surrounded by his toys, out of harm’s way.

Buy a buggy board

Hector felt very grown up skating along behind the pram on a buggy board.

It was a nightmare to fit (had to get my father to do it in the end) but it has been really useful. Just don’t (as I did) go too far on your first journey; your toddler’s legs will get tired and you’ll end up pushing pram and carrying toddler.

Telly is your friend

The chaotic phase is quite short but while it lasts you should do everything you can to take the pressure off. Hector was going through a sticker book phase when Alfred arrived, which was a complete nightmare – unpeeling fiddly stickers and helping tiny fingers postion them on a page while holding a screaming newborn is no fun at all.  Peppa Pig all the way.

Not just for you but for your toddler, too. I found the Pumpkin Tree Organics pasta sauces good (you’ve cooked the pasta so it’s ok) and bought packets of grated cheese to ensure less washing up.  M & S does great mini pizzas and other kids meals (not so sure about the baby food though) and Annabel Karmel ready meals are good too.

You can return to preparing homemade extravaganzas for your toddler when things have calmed down a bit.

Thank goodness I’d got Hector well trained in this respect. He loves going out for a “coffee” (hot chocolate). We did this far too much in the early days of Alfred’s life but I lived for these outings together.

Alfred would sleep in the pram and Hector would sit opposite me at a table, spilling a hot chocolate everywhere. It was great to be out, even if it did cost £5 for the privilege.

By
Anna Tyzack
More from Anna Tyzack
Two weeks ago I packed my hospital bag … and another bag...
Read More

Why Mindfulness Is The Key To An Uncertain Future

How To Cheer Up Lonely Relations During Lockdown

Anna Whitehouse: How To Save Your Relationship In Lockdown