So skilled are my children at delaying bedtime, that stories are often hurried, frustrated affairs.  My husband and I are exhausted after succumbing to their numerous red herrings … honey toast… drinks…. one last go on the trampoline…. Paw Patrol…. apple chopped up into tiny pieces and served in a bowl. Yep, we’re total suckers.

Meanwhile Hector, three, and Alfred, two, have different tastes in books and, after so much evening excitement, are prone to fight at this late hour.

For all the above reasons I wasn’t expecting much when I read them a new book last week, Before you Sleep by father of four Benji Bennett.

We sat on Hector’s bed, as we always do, Hector beside me, Alfie on my knee, and we’d turned four or five pages before it struck me how unusually still and calm they were, their eyes glued to the book in my hands.

There’s a very sad story behind Before you go to Sleep which I must just tell you. A couple of years ago Benji, from Ireland, lost his son Adam, four, very suddenly. 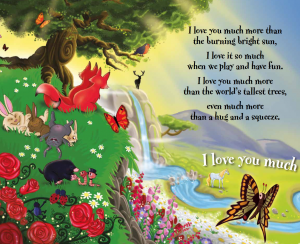 It was the kind of heartbreaking scenario every parent dreads: Adam complained of a headache and three days later he died of an undiagnosed undiagnosed vascular brain tumour.  Benji, his wife Jackie and their other children, Harry and Robbie had to say goodbye.

The book is a tribute to Adam, originally published in Ireland on the first anniversary of his death and now available in the UK and USA.

Benji was determined that something positive would come out of their family’s tragedy and in the dark, painful months that followed his son’s death he wrote Before You Sleep, a poem to help parents express how much they love their children, and encourage feelings of love and togetherness.

Each new verse begins “I love you much more than….” and the scene that follows is an indulgent journey into a toddler’s imagination: there are pirates, princesses, diggers, aeroplanes, fairgrounds and Father Christmas. The book outsold The Gruffalo in Ireland and won a prestigious Irish Book Award.

Hector and Alfred sat in silence, listening to the rhyming verse and devouring the cartoon illustrations, which seem kitsch to my cynical adult eye but are in fact a genius depiction of a child’s imagination, capturing every last, beautiful detail. 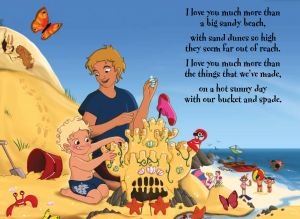 Benji’s book is a lesson for parents as much as for children. I’d like to think my children already know that I love them, and don’t need metaphors to make them understand how much – but going by their reaction to the book, maybe they do. Maybe you can’t tell your children you love them enough. 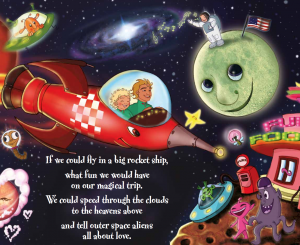 As I sat in their little bedroom, reading them this story about parental love, I felt an overwhelming urge to draw them close to me, to cherish this quiet moment at the end of a busy day.

It wasn’t the words choking me by the end, but the two, sweet little people listening intently to these hyperbolic expressions of love.

“Again! Again!” they chorussed as I closed the book.

When eventually I got downstairs, having read it twice more, I felt warm and loving and so grateful for my children.

And then Hector appeared in the kitchen doorway…

Written By
Anna Tyzack
More from Anna Tyzack
This is Pepper. He is a brown Jelly Cat rabbit belonging to...
Read More

One reply on “Review: Before You Sleep by Benji Bennett”

A Valentine’s letter from his teacher made his d

The Complete Guide To Sleep Regression is now on M

Need a good snowsuit in this weather ⛄️ And so