If you are a parent of a toddler, you know the inside-out of a full-blown tantrum. The kind that happens in the shopping mall, at the supermarket till, outside the nursery, at the community centre… anywhere, anytime really!

You know it’s coming, you know how it’s going to play out, you know the outcome, and you bloody hate those few (but seem-like-infinity) moments.

You want to sink into the earth or pretend that’s not your child. Sadly, you can do neither. I’ve been there so many times, and yet, I don’t learn.

Presenting: The Seven Deadly Stages of a Tantrum

1. Refusal to see the signs

This is where most parents – including me – fail. And then it’s all downhill from there. We refuse to see the signs, the ‘instigators’ as I call them – and even if we do, we believe in the goodness of our toddler and the Universe (wtf were we thinking?!) and choose to ignore them.

Signs like overtiredness, hunger, boredom, temptation (why the hell would I walk past a Lego shop when I know Little Man is waaaay past his naptime and super irritable?!).

We think things will be different this time around, somehow believe our toddler won’t have a meltdown (why would today be any different?!), that today is our lucky day etc etc. Wake up!!! The same shit will happen today. Just see the bloody signs!

So, it’s happened. You’ve failed stage 1 and now, as I mentioned, it’s a downward journey. Though there is a 2 per cent chance you could redeem the situation (if it’s your lucky day that is!).

You could offer whining toddler something he/she really badly wants. Like a new toy. An icecream. An extra 200 stories at bedtime. Whatever steers their boat. If it’s your day, they’ll shut up. If you’re in the 98 per cent category, you will progress to the third stage.

The shit has now hit the ceiling. Toddler is screeching/ howling/ screaming/ arms-in-the air and feet all-a-kicking. People are watching.

Other mums judging. Your blood pressure is rising, just as quickly as your dignity is sinking. You want to be aggressive, you want to shout: Shut the f*** up!, but obviously you can’t, because you’re a mother and you’re in a public place!

So it’s aggressive on the inside (where you are reaching boiling point) but still passive on the outside. 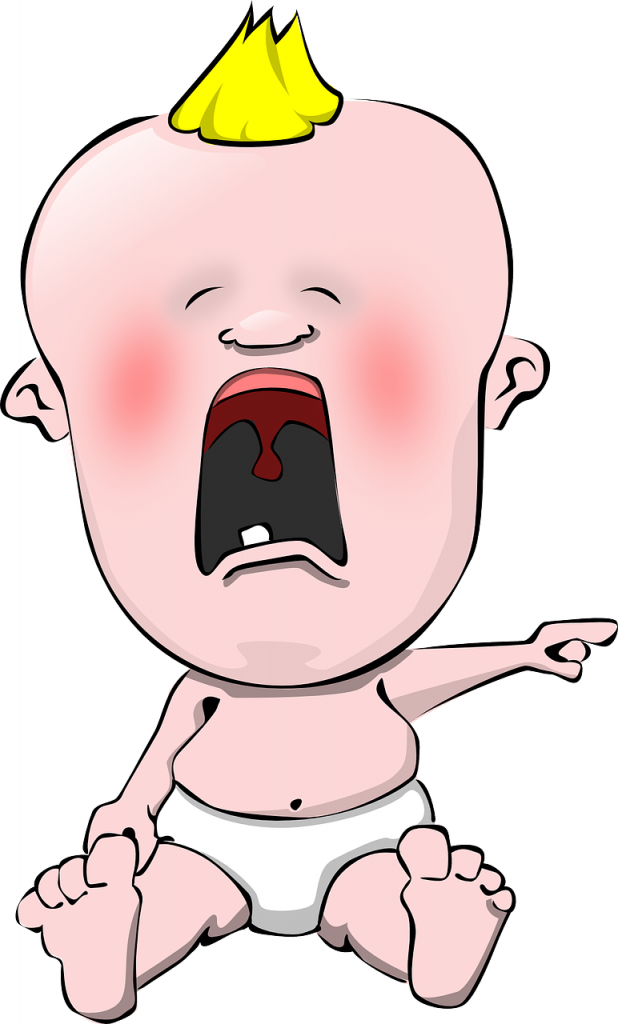 When points 2 and 3 fail, you turn to God. You hope for a miracle. You make silent promises that if your toddler stops his histrionics you will become a better person/ mother/ whatever.

Even God can’t do much with a full-blown tantruming toddler, you realise.

So you give up. You are in a brief period of denial.

No, this CANNOT be happening to me.

Didn’t we just go through this scenario yesterday?! Your inner self starts walking away, you smile at passers-by pretending that’s not your kid, you do anything to preserve that ounce of dignity that’s left.

Till… the dreaded Deadlift occurs. You hate this bit. This is when the screams pass human hearing decibels and your toddler suddenly goes into a semi-fit. Sprawled across the floor, arms up, legs kicking… scary shit.

You attempt to pick him up (to pacify/ reason/ run) but you physically cannot because of the deadly Deadlift position all tantruming toddlers master.

They arch their backs and suddenly put on 15 kilos – it’s IMPOSSIBLE to pick them up/ hold onto them during this stage. Accept that you can’t do shit. Think of the amount of wine you will consume later tonight.

It’s the last stage… you can see the light at the end of the tunnel… but you realise it’s still not all over.

You have to let the Deadlift stage pass, and then tread with caution, because although the worst is over, the atmosphere is still simmering.

Either pick up toddler and make a hurried exit, or calm (now tired) toddler down, comfort him and make some sort of deal with him: if he comes to the car right now, he will get XYZ…

PS: This post was inspired and thought of while Little Man was in the midst of a huge tantrum last weekend – I shouldn’t have walked past that damn Lego shop!!!

By
Nicole Dastur
More from Nicole Dastur
If you are a parent of a toddler, you know the inside-out...
Read More