Wandsworth is the most breastfeeding-friendly London Borough, according to research by Magenta Flowers, with Southwark and Lambeth in second and third places on the league.

More than 1000 venues and restaurants across the UK were analysed in the study, which showed that Wandsworth has 64 breastfeeding venues, compared to 40 in Southwark and 16 in Lambeth. Kensington and Chelsea, meanwhile, has just two. 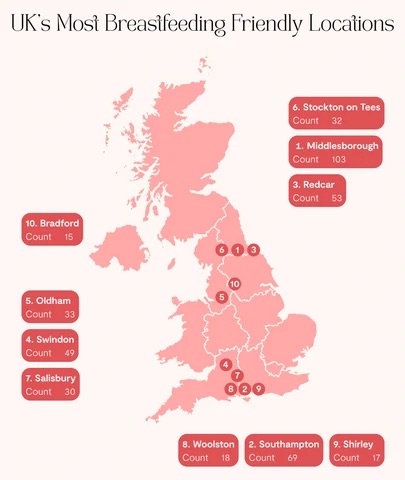 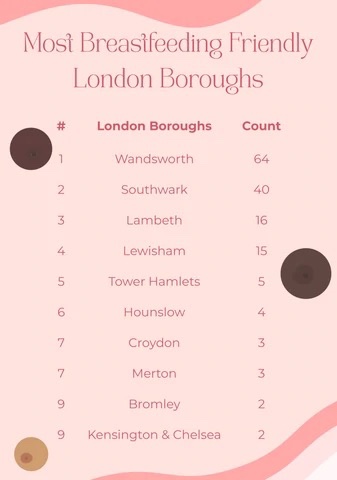 Across the rest of the country Middlesbrough, Southampton and Redcar are the most breastfeeding-friendly locations, with North Yorkshire the most breast-feeding friendly county with 300 accommodating locations.

The venues counted in the study each take active steps to ensure mothers are comfortable and respected when breastfeeding outside the home. Only 39 per cent of mothers with babies aged four to six months feel comfortable enough to breastfeed when out and about; a breastfeeding welcome venue bears a pink and white sticker, assuring mothers that they will be supported.

Lactation consultant, Emma Pickett says, “Staff need to know what a breastfeeding family might need and understand the value of breastfeeding and why it’s something that’s worth supporting.”

As of 2010, the Equality Act says that it is discrimination to treat a woman unfairly because she is breastfeeding.

Written By
Anna Tyzack
More from Anna Tyzack
Are you suffering from Mummy-morphosis? According to new research, more than half...
Read More

0 replies on “Wandsworth Is London’s Most Breastfeeding-Friendly Borough”